Admission is a free-will donation ($10 is suggested) and items of non-perishable food for the Flathead Food Bank. 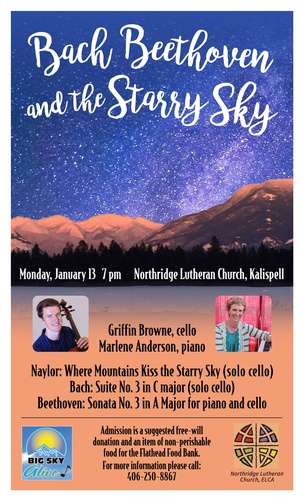 Big Sky Alive! continues its Mostly Monday Music Series on Monday, January 13 with a concert featuring the world premiere of a piece for solo cello performed by Dr. Griffin Browne, principal cellist with the Glacier Symphony. Titled “Where Mountains Kiss the Starry Sky,” the piece is composed by Craig Thomas Naylor, who founded the Big Sky Alive! non-profit music organization in 2012.
Naylor describes the piece as a stream-of-consciousness excursion of hiking in our majestic mountains. “Thoughts of work to do, errands to run, obligations to fulfill intrude - but gradually fade away - leaving only peacefulness and awe at God’s handiwork.”
He adds that the piece reflects the Big Sky Alive! mission to add more contemporary musical offerings by living male and female composers to the Flathead valley.
‘Starry Sky’ will open the evening of music that also offers Suite No. 3 in C Major by J.S. Bach, a work for solo cello, and concludes with Beethoven’s Sonata No. 3 for cello and piano, that will bring local classical pianist, Marlene Anderson to the stage.
Beyond his role with the Symphony, Browne is a private cello instructor and a free-lance musician. He received his Doctoral and Masters degrees in cello performance from the University of Memphis, and his Bachelor of Music degree from Stetson University and has appeared as soloist with orchestras in Montana, Tennessee, and Mississippi.
He says he is delighted to present this concert alongside his colleague Marlene. “It will feature some standard classical cello works and this intriguing new piece. I hope it will be an enjoyable journey from meditating in the woods of Montana, to an aural and spiritual “bath” of Bach, to ending with the deep contemplation and light-hearted joy of Beethoven's sonata.”
Ms. Anderson is a classically trained pianist, who regularly performs across the Flathead Valley in various venues including as a church musician, accompanist for instrumentalists and vocalists, and collaborator for chamber music events.
Big Sky Alive! founder and music director, Naylor, holds a Doctorate in Music Composition from the University of Southern California and has an extensive resume as a composer, conductor and performer. 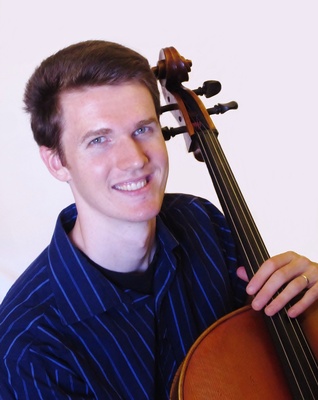 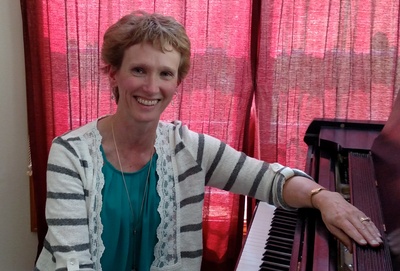